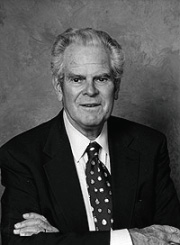 Dr. Frederick E. Sontag, the Robert C. Denison Professor of Philosophy at Pomona College, died Sunday, June 14, 2009 at the age of 84, after several months of declining health. Professor Sontag recently retired from the Pomona faculty, bringing a close to a 57-year tenure as a member of Pomona's Philosophy Department. The author of 28 books, he was a much-beloved figure at Pomona and beyond.

Professor Sontag has a place within the Unification tradition as the first American scholar to undertake a serious and systematic investigation of the Unification Church. He interviewed members and movement leaders on three continents, stayed in church centers, attended a weekend training session as a participant, attended the Washington Monument rally as a spectator, and "contacted as many ex-members and anti-Moon organizations as possible to gather their literature." He also conducted a nine-hour interview with Rev. Moon, the first and likely the last of its kind. The results of his investigation were published as Sun Myung Moon and the Unification Church (Abingdon, 1977). Dr. Sontag noted that "the Moon phenomenon does not admit of easy solutions" and that for every simple issue resolved, "more important and difficult questions emerged." Nevertheless, he did reach "two firm conclusions." These were: "(1) The origins of the movement are genuinely humble, religious, and spiritual (which many doubt); and (2) the adaptability and solidarity of the movement are such that we are dealing with a movement here to stay."

His book was not an end-of-story in his relationship with the Unification movement. He was a regular attendee at the International Conference on the Unity of the Sciences (ICUS) and a founding board member of the New Ecumenical Research Association (New ERA). Making the case that "God must be the center of dialogue," Professor Sontag was the moving force behind the convening of four major "God Conferences" from 1979 to 1982. Applying this conviction to the Unification movement, he penned an important article, "The God of Principle: A Critical Evaluation" in Ten Theologians Respond to the Unification Church (1981) later reprinted in abridged form in The Journal of Ecumenical Studies (Fall 1985). In his exposition, Dr. Sontag warned that God was subordinated to the Principle in Unification theology and questioned whether the "the God of Principle" would "survive the refining fire which the-God-beyond-the-Principle seems to send to test every new incarnation."

Professor Sontag later published a significant article for this journal, "The Unification Church: Theory vs. Practice/Ideal vs. Reality" (1999-2000) as part of a 40th Anniversary Forum on the Unification Church in America. "The point of this ... piece," he wrote, was "to ask: What happens when time passes, as it must, and the ideal life still seems held off at arm's length, or when one is embroiled in less than ideal actions with leaders or other members?" Touching upon arranged marriages, a rigid hierarchical structure of church life, "Koreanization" of the church, communal life, a demand for continual individual sacrifice, political and commercial ventures, and "provincial cultural accretions that stem from its Korean origin," he listed twelve recommendations for bringing Unification doctrine, religious aims and millennial goals into alignment.

Ever the sympathetic mentor-critic, Dr. Sontag remained faithful to his initial conclusion vis-à-vis Unificationism: "We have witnessed in our own lifetime the birth, growing pains-and will see the maturity-of a new religious movement." The Unification Movement can be grateful to Professor Sontag for his role in that maturation process.